Having your images compared with those of your peers is all part of modern-day photography. However entering serious competitions is another matter. I have always been very critical of my own images. Yet friends and family have always been more positive and urged me to enter competitions.
I have only taken the plunge and entered competitions on three occasions. Amazingly I have had success twice!

The Veolia Environment Wildlife Photographer of the Year competition is the pinnacle of achievement for wildlife photographers. As a biologist and ecologist as well as a photographer I can appreciate the skill in obtaining 'that' image. Each year I have visited the exhibition of the winning images and thought "can any of my photographs be considered in the same league?" There is only one way to find out!

In 2012 I had put the thought aside having been unsuccessful in 2011. However, in February I was having dinner with a photographer I had worked with in Antarctica a couple of months previously and she mentioned she was just sorting her entries. It made me think again "Am I good enough?" I had just 10 days to get everything in place for this years submissions. I submitted four images each in a different category.

Imagine my delight when I received an email telling me two images had been selected for the final. To me, a humble self-taught amateur this was as good as winning! I was ecstatic!!

It didn't end there. A few weeks later I got another email bringing the thrilling news I had been 'Commended' for one of my images! I was overjoyed. I can now be considered up amongst some of those incredible wildlife photographers. It has really inspired me to spend more time trying to take better photographs and to enter more competitions!

So what were the images?

The Commended Image was in the 'Animals in their Environment' category

The elegance of the Snow Petrel seems to defy the harshness of Antarctica. I wanted to capture the combined beauty of the ice, power of the boiling sea and elegance of the bird in flight. A single bird was flying among tabular icebergs in a storm. Suddenly all the elements came together close enough to the ship for me to capture this image. I was delighted with the image.


The second image which made the final, but alas did not progress further was in the 'Black and White' category 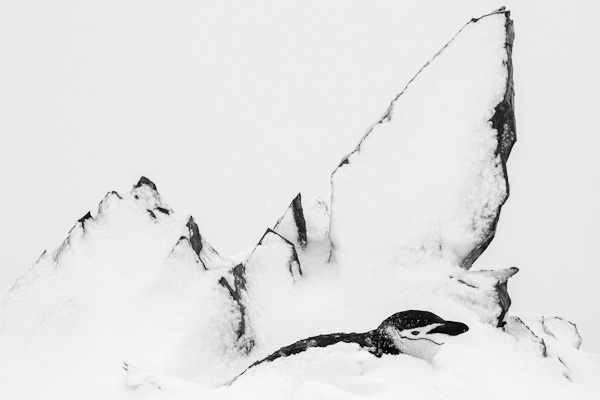 I climbed to a ridge above Orne Harbour on the Antarctic Peninsula where Chinstrap Penguins nest. It was white-out conditions with driving snow and the penguins were hunkered down tight on their nests. The rocks behind the nest were covered with snow leaving just the silhouette of the rock apparently floating in a white space. The only part of the image that changed colour when I converted it to black and white was the eye.

The travel magazine "Wanderlust" inspires both travel and the photographic imagination. I noted the monthly Photo Competition was on the theme of 'Action!' I thought I had just the image and sent it off ... 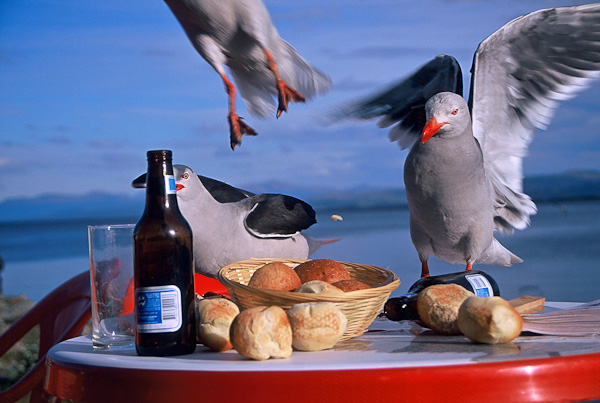 
The vivid red of the beaks and feet of the Dolphin Gull intrigued me as they raided our food while having a quiet drink on the shore of the Beagle Channel just before my first trip to Antarctica. The birds were moving so fast they were seldom all in the frame, but this added to the feeling of Action.


I must enter more competitions!